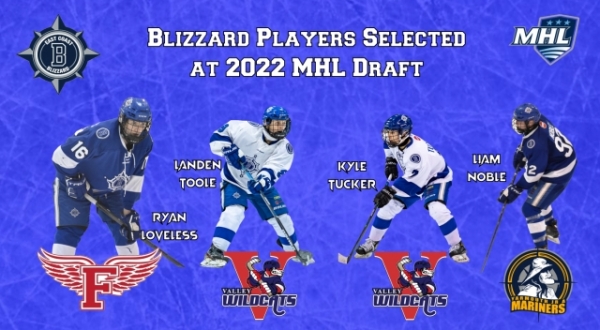 Forward Ryan Loveless was the first Blizzard player selected. He was taken in the fourth round, 45th overall, by the Fredericton Red Wings. Loveless was the Blizzard's leading scorer last season.

The other three Blizzard players were all selected in the seventh round. The Valley Wildcats used picks 78 and 80 to take Blizzard forwards Landen Toole and Kyle Tucker. The players scored 32 (Tucker) and 31 (Toole) points last season.

The Yarmouth Mariners selected Blizzard centre, Liam Noble, with the 83rd overall pick, also in round seven. Noble had 39 points last season in blue and white.

In all, thirteen players from Newfoundland and Labrador were selected over the course of the MHL Draft.